From a rainbow in the desert to bears in the wilderness: Striking new photobook 10 years in the making reveals the splendour of the world’s most remote places

Swiss explorer and photographer Stefan Forster admits that he is no stranger to dodging alligators and hiking for weeks in pursuit of the perfect photo.

And an impressive new photobook shows that his efforts pay off handsomely.

Taken across 10 years and 60 photo tours and expeditions, Chasing Light, published by teNeues, showcases some of his best-ever shots, taken in some of the world’s most remote and challenging places.

And they are breathtaking.

The 150-plus images in the tome showcase rare weather events in exotic places, once-in-a-lifetime animal scenes and Mother Nature at her most ferocious, in locations from Africa to Iceland.

In the foreword to his book Forster writes: ‘I paddled by kayak along the west coast of Greenland; camped in the forests of Alaska and Canada; climbed volcanoes without permission; [and] waited, shivering with frost, for months to see an aurora. Our planet has endless fascinations. I have gathered a photographic record of nature’s unparalleled beauty.’ Scroll down for a sneak peek at some of the most astounding photos from the book. 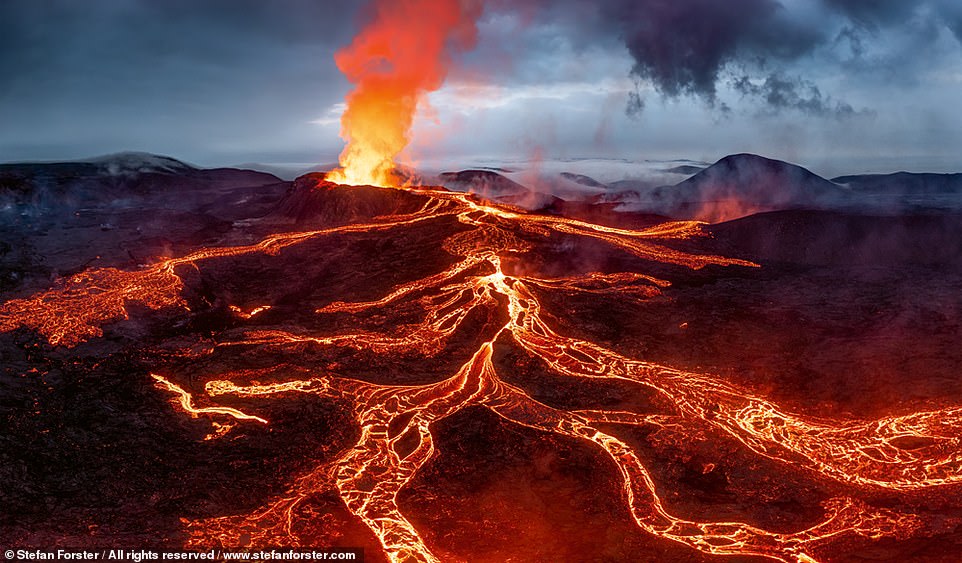 This dramatic image shows Iceland‘s Fagradalsfjall volcano. Forster said: ‘The true majesty and power of Iceland‘s Fagradalsfjall volcano only becomes apparent from the air. This panorama was assembled at the end of June 2021 from 22 individual shots to show one of the volcano’s most violent eruptions since it first became active in March. Large quantities of lava flowed into the surrounding valleys for more than 16 hours’ 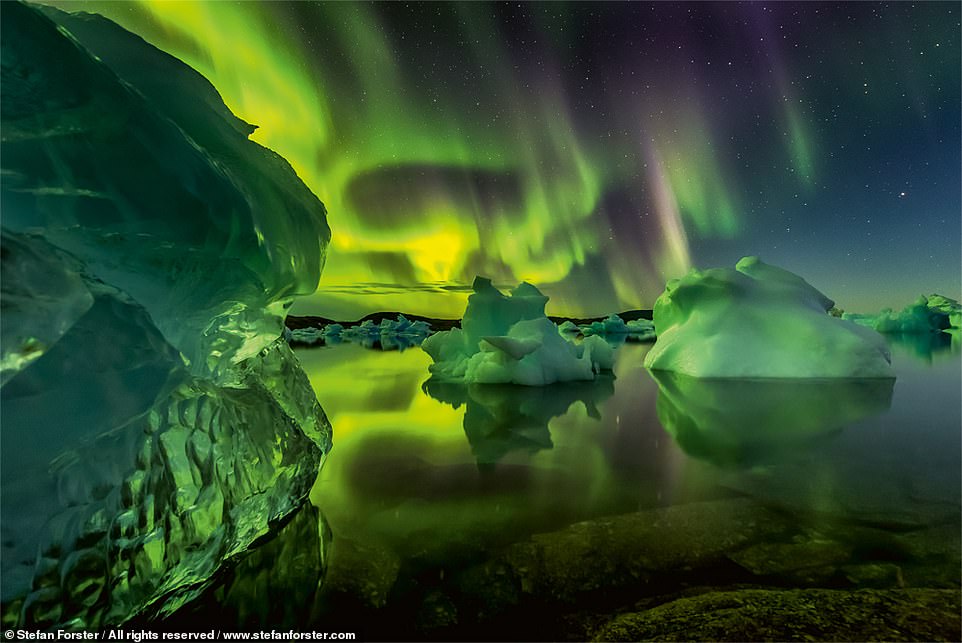 This stunning picture of the evasive Northern Lights was taken in Narsarsuaq, Greenland. Forster remembers: ‘Effectively, everything was perfect on this particular night. Low tide had opened a path to the icebergs, the sea surface was a mirror in the calm air, and the Northern Lights were glowing directly behind this transparent iceberg. Probably the most beautiful aurora borealis of my lifetime’ 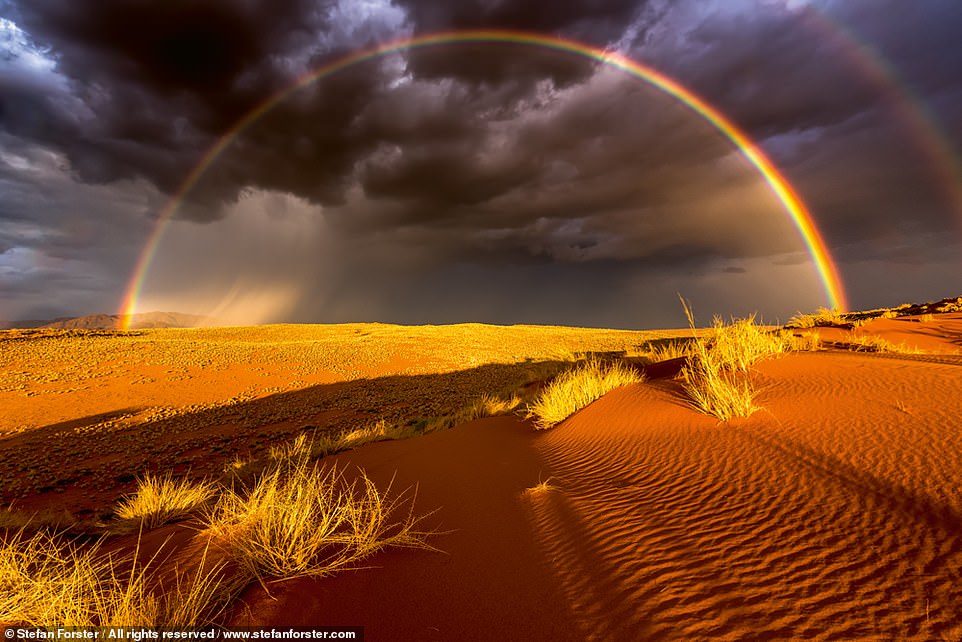 In the book, Forster acknowledges that this shot is probably the rarest photograph he’ll ever take in his lifetime. He explains: ‘Here come the heaviest rains in decades over the Wolwedans dunes in Namib-Naukluft National Park, and I’m in the centre of the action with my camera. All told it took me eight trips to Namibia before I finally caught up with rain’ 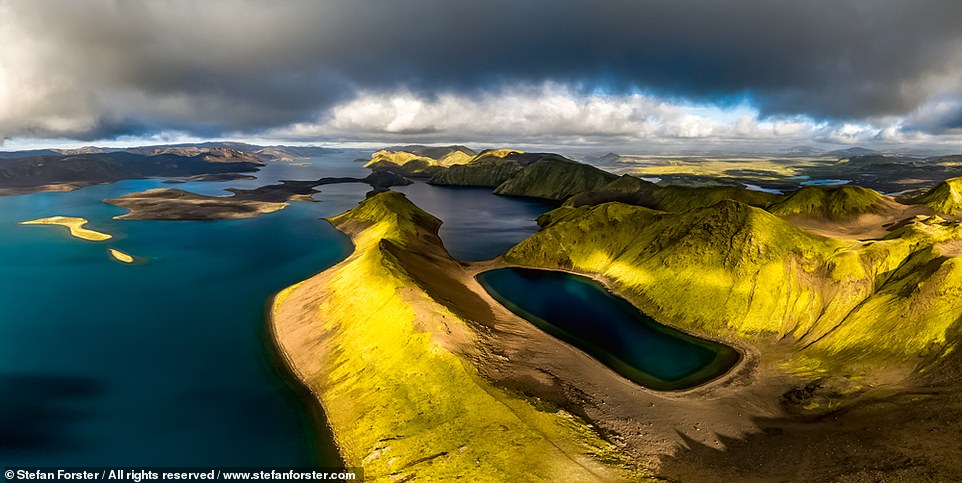 ‘This spot on Langisjor, a lake on the Icelandic plateau, is a personal refuge for me,’ Forster writes in the book. ‘I walked its shores for weeks, camped atop a peak by myself and looked out into the distance. This aerial image consists of 16 individual exposures taken in the summer of 2016 and stitched together into a panoramic image’ 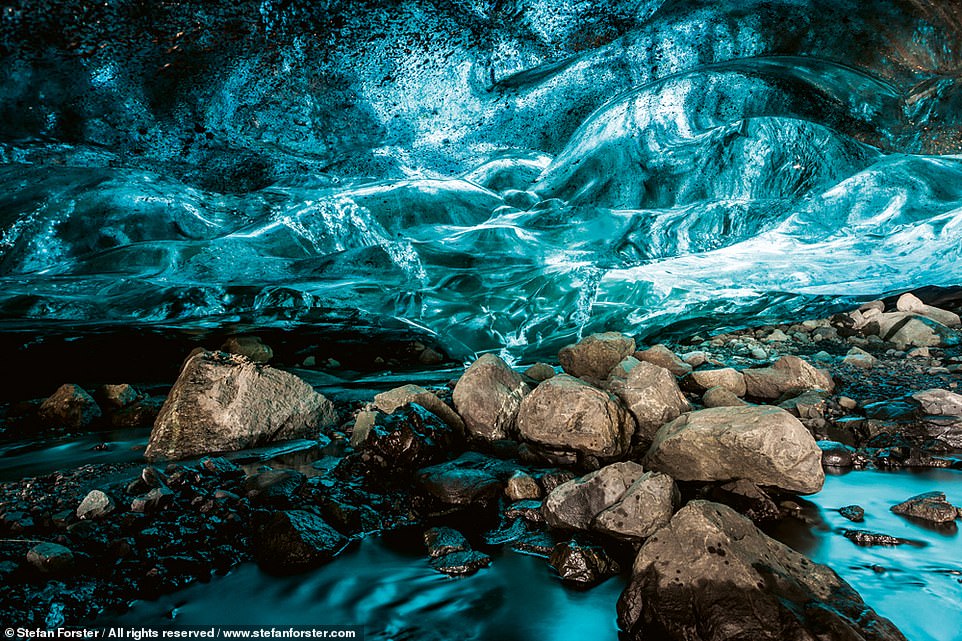 This luminous image was taken at the Vatnajokull ice cap in Iceland where Forster says: ‘Thanks to a tripod and long exposure times it’s possible photographically to capture daylight shimmering through the glaciers’ 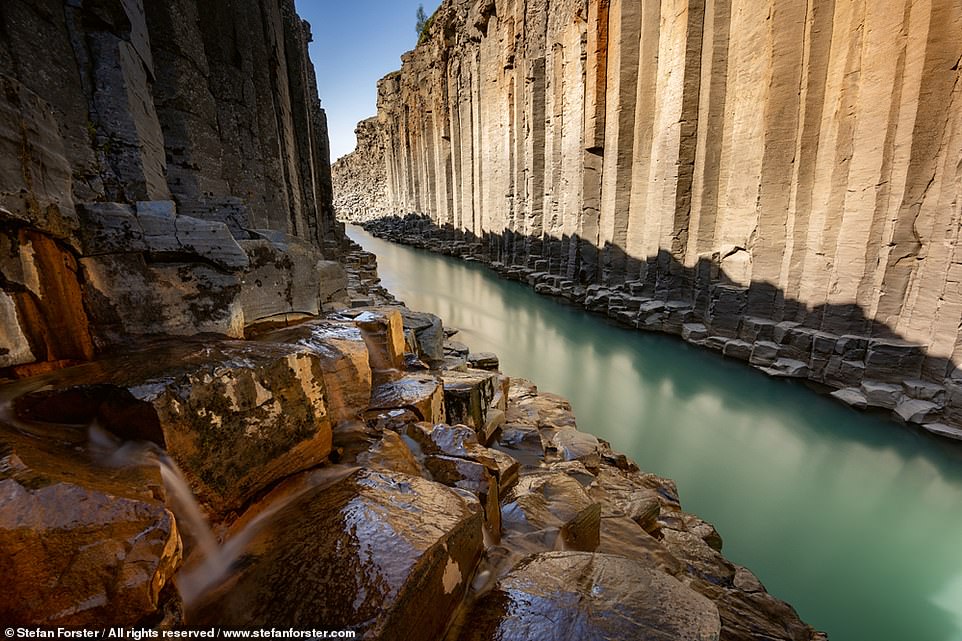 Pictured is the Studlagil Canyon in northeastern Iceland. Forster explains: ‘The first pictures of this canyon, formed by basalt columns, hit the Internet a few years ago. Photographers were fascinated by their surreal shapes, so it’s not surprising that a few years later, Studlagil Canyon became one of the most frequently photographed places in northeastern Iceland’ 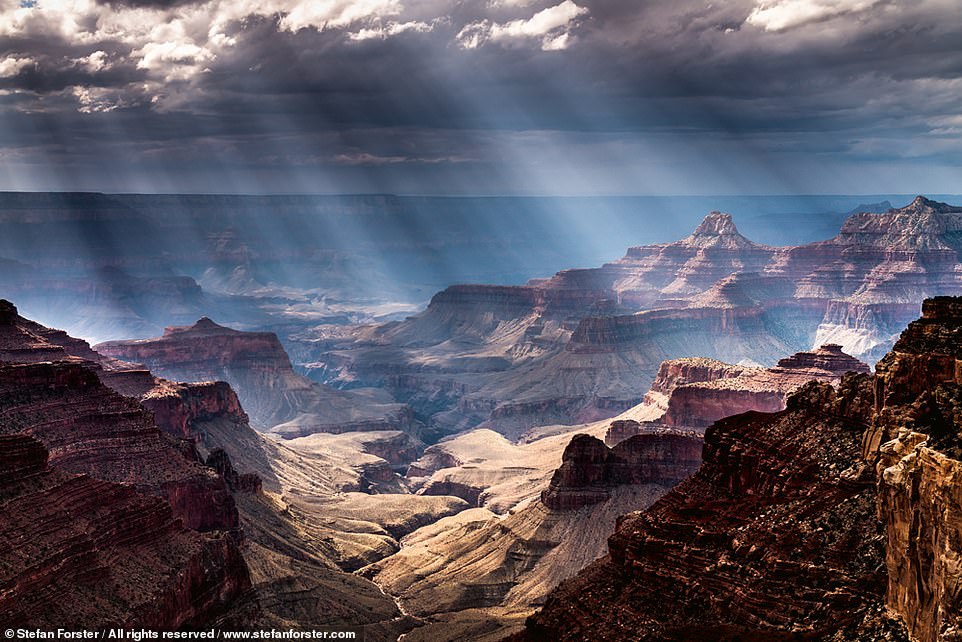 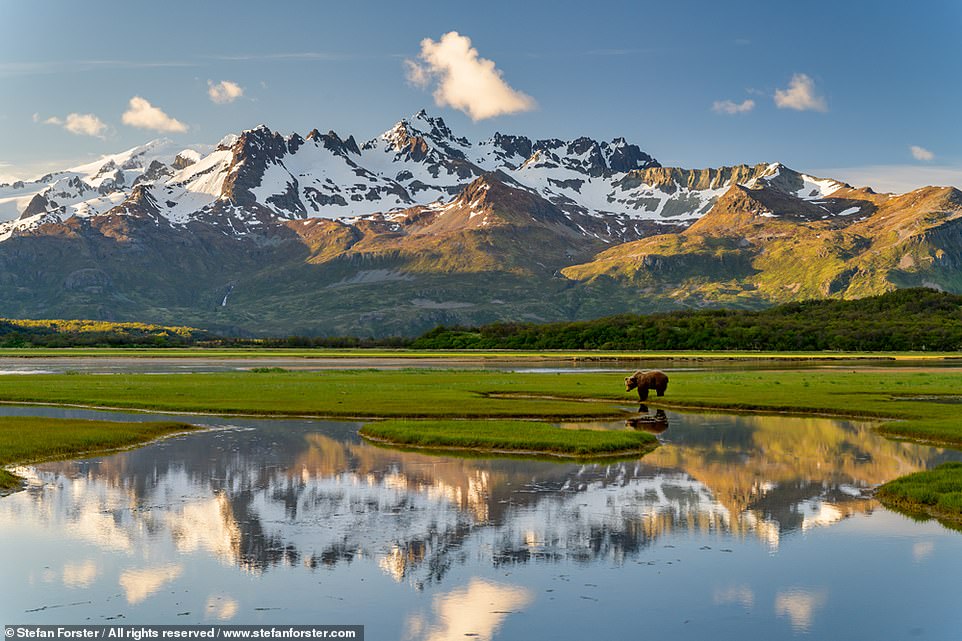 In the book, Forster explains how this image was taken in Alaska on one of the greatest adventures of his life. He writes: ‘Together with one of Switzerland’s best-known bear experts, Remo Sommerhalder, I hung out with the grizzly bears in Katmai National Park for ten days. Because we were the first photographers flown into these isolated coves after the hard winter, we had the enormous bears all to ourselves. The landscape is breathtaking all on its own, but the bears in the foreground are the icing on the cake’ 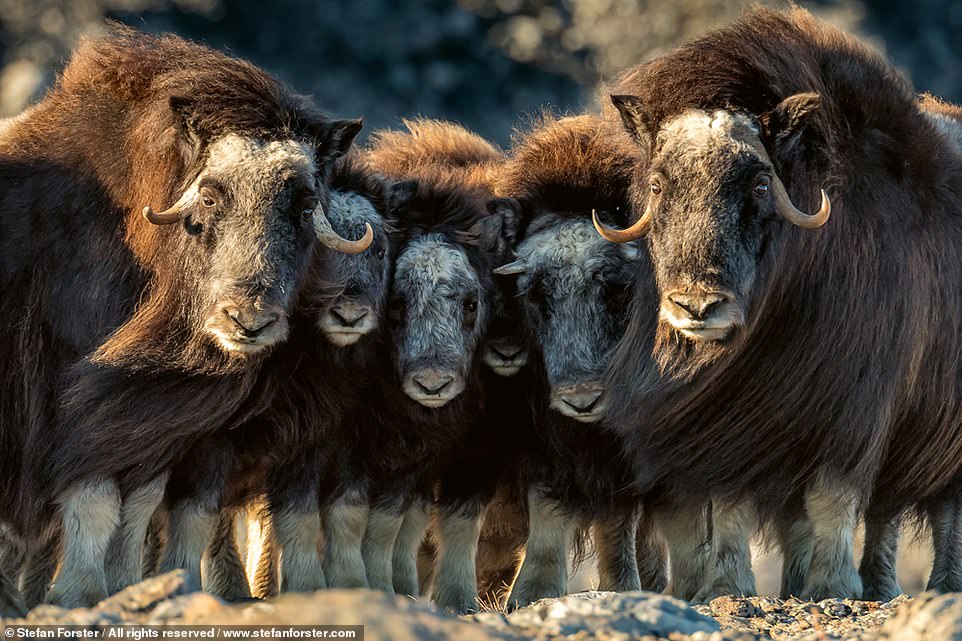 ‘Had I planned this image of wild muskox on the Greenland ice sheet, I might have spent years waiting for this moment,’ Forster explains. ‘I got this image far away from civilisation during the course of hours executing my approach of a large herd of muskox. I must have gotten too close, for the cows formed a kind of protective wall around the calves. The symmetry of this wall could not have been better’ 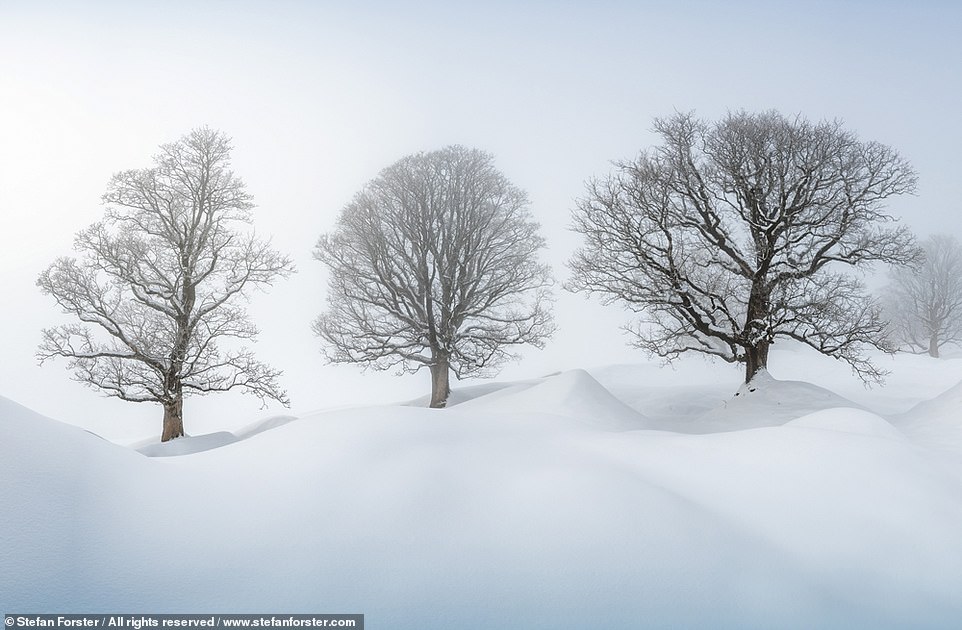 This image was taken in the snow-drenched hills of St Gallen in Switzerland. Forster reveals: ‘When winter comes, the rolling hills of the St Gallen highlands are transformed into gorgeous white snowy dunes. Many deciduous tree species are found here in a very small area, each spaced precisely the same distance apart. Everything came together the day this photo was taken: fresh, deep snow and fog just touching the tops of these three trees’

Virgin Voyages unveils its third cruise ship – Resilient Lady, which will be based in Athens